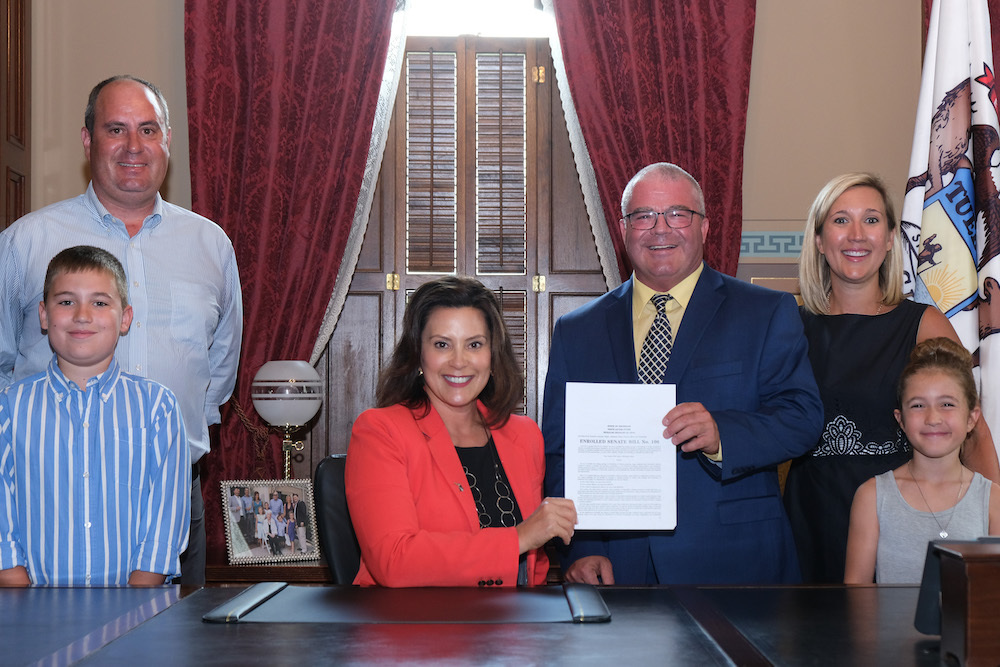 Michigan state Sen. Rick Outman (R-Six Lakes) had a number of reasons for pushing as hard as he did for the passage of Senate Bill 106, which prohibits the sale of vapor products to minors.

“From school teachers to bus drivers, I have a lot of family members working in the public school system, and they all tell me about their daily hassle of dealing with kids and this issue,” Outman told the North Kent News. “Even more than nicotine and tobacco, this legislation is designed to keep this device out of the hands of kids.”

During the bill signing for the legislation that officially went into effect Sept. 2, Outman was joined at the ceremony by MacNaughton Elementary principal Dan Clegg and members of his family.

“I think showing a united front is important,” said Outman, adding that getting the legislation across the finish line was perhaps a bit more challenging than some thought it would be.

“There were well-meaning groups that you would think would be all for this that were against this because they wanted to label the device a tobacco product,” he said. “I thought it was more important to outlaw the device because the stuff people use to put in there is always changing. You’d have to keep changing the law to adjust but if you outlaw the device it can’t be used for anything.”

In addition to SB 106, Michigan recently became the first state to ban the sale of flavored e-cigarettes, with Gov. Gretchen Whitmer adding that the executive order she signed off on was at least partly written as a way of curbing teen vaping use.

An Oregon resident recently became the second person in the country to die from lung disease illness believed to stem from vaping.

Health officials indicated that the victim was believed to have used a vaping device filled with marijuana and that the person’s symptoms were consistent with the scores of similar cases of respiratory illnesses that have been documented across the country.

Want to get notified whenever we write about Michigan State Senate ?

Sign-up Next time we write about Michigan State Senate, we'll email you a link to the story. You may edit your settings or unsubscribe at any time.